View our blog below for the latest on what's happening around our communities! 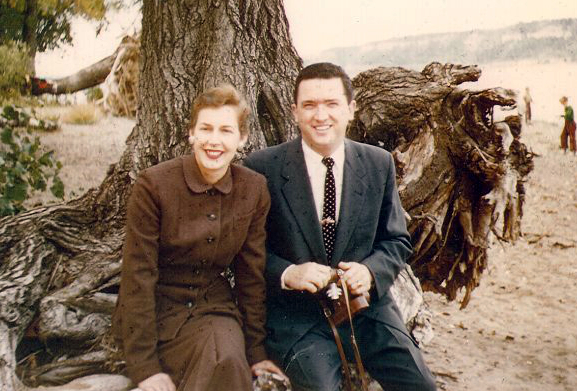 My grandparents had a love story that could have been made for the movies. They both grew up in a small, hardworking town in Flint, Michigan, in the 1920’s. They knew of each other in high school, but both kept their distance, pursuing their own interests and friendships.

After high school, my grandmother attended and graduated nursing school, and my grandfather attended Notre Dame University before being drafted into WWII after one semester. He went through training and became a B-17 Flight Navigator. He flew 35 missions over Germany during his time in the military. In 1945, he returned home to finish his degree at the University of Michigan.

Upon his second day home from overseas, he was in downtown Flint shopping for civilian clothes, when he spotted a beautiful young woman at the bus stop in nursing clothes. He stopped, paused, and thought, “Is that Dorothy Turner?” He approached the young lady, only to find out it was Dorothy. That young lady he knew of all those years in high school had turned into a beautiful woman. He didn’t waste any time, and after conversing for a few moments, asked her out on what would be the last first date for the both of them.

For their first date they attended the movie “Love Letters.” Approximately one year later, they were married in a church, just the two of them, plus his best man and her maid of honor. They had a very, very small reception that her parents threw for them in their backyard. No large party, no over the top production, just a simple gathering to celebrate their marriage.

Over the years, they had three children, 8 grandchildren, and even a few great grandchildren. They moved 13 times throughout the course of their marriage, due to my grandfather’s career, before retiring in Arizona in 1983. They made it look easy and instilled great values about the importance of family, love, hard work and faith in all of us. They only had eyes for each other and you could always see the love and respect between the two of them.

In her 70’s, my grandmother started displaying signs of dementia, which led to Alzheimer’s. My grandfather took great care of her in their home, until it became too hard to do all on his own, and moved her to a nearby assisted living/memory care community.

My grandparents used to love traveling, especially to see family, since we are all spread out across the United States. Once my grandmother became ill and moved into the facility, my grandfather stopped traveling. My grandmother lived in the facility for six years. Every single day, all those years, my grandfather went to visit my grandma at 2pm sharp. There were many days where my grandma didn’t know who he was, or who any of her other family visiting was, but my grandpa was always there, by her side, offering his love and support.

My grandmother passed away in 2009. They were married for 63 years.

My grandpa’s birthday is on the 4th of July (he just turned 93) and on his birthday he received a special gift from family. It was an original, framed movie poster from “Love Letters.” A little piece of their history and love story was now preserved and framed. It is now hanging in his Arizona home that he shared with my grandmother for many years. It is one love story my grandfather will never forget.